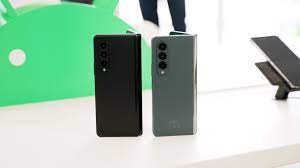 News Tech: We’re here to compare the recently introduced highly intriguing foldables from Samsung and Xiaomi. We’ll contrast the Xiaomi MIX Fold 2 with Samsung Galaxy Z Fold 4. Both of these opened like books. Unfortunately, the Xiaomi MIX Fold 2 was only available in China at the time this article was written. Though nothing is definite yet, we hope that will soon change. In terms of the worldwide foldable market, Samsung essentially has a monopoly; additional competition would be welcome. Xiaomi would undoubtedly offer it. When compared to the Galaxy Z Fold 4, the MIX Fold 2 is a more capable and intriguing smartphone. We’ll start by listing the features of the two phones.

The MIX Fold 2 feels like a large smartphone when folded, while you’ll definitely notice the extra thickness on the Fold 4, and thus always know it’s a foldable. Also, the Xiaomi MIX Fold 2 does not have a camera on its main display. The Galaxy Z Fold 4 does have one, it’s an under-display one, but still visible. Both include a centered display camera hole on the cover display, and thin bezels.

The back sides, where the main cameras sit, are also different. The Galaxy Z Fold 4 has a nicer-looking camera island where cameras are vertically-aligned. The Xiaomi MIX Fold 2 comes with a rectangular strip at the top, which looks a bit odd, but it’s not too large. Both phones are quite slippery, so do note that. Both feel nice when they’re being folded, but do note that you can’t really fold the MIX Fold 2 halfway, like you can the Galaxy Z Fold 4.

The displays on both smartphones are truly excellent. That actually goes for both sets of displays. All of them offer a high refresh rate, and hit all the right spots, while they also feel nice to use. They all get really bright, even in direct sunlight. Not as bright as the brightest panels on smartphones, but not far from it. The colors are vivid on all of them, and they have great viewing angles. Chances are you won’t have complaints on either of them.

The performance is, of course, really important, especially when you talk about phones that are this expensive. You’ll be glad to know, though, that both of these phones deliver in that regard. Both smartphones are fueled by the Snapdragon 8+ Gen 1 SoC, and include 12GB of LPDDR5 RAM. They also offer UFS 3.1 flash storage, though several different flavors are available for both phones. Android 12L comes pre-installed on Samsung’s device, with the company’s custom skin. Android 12 is included on the MIX Fold 2, with Xiaomi’s skin. That being said, the experience of using these two is a bit different in comparison, but they both deliver in the performance department. Regardless of whether you’re browsing the web, editing a picture, or playing games, both of these phones handle all that without a problem.

You should not experience any lag, only occasional stutters, as on any other phone, but those are quite minimal as well. Qualcomm and TSMC did a great job with the Snapdragon 8+ Gen 1, and it shows. The two phones are also well-optimized. Samsung Galaxy Z Fold 4 vs Xiaomi MIX Fold 2: Battery
Spoiler alert, both of these phones do a good job in the battery department. The Galaxy Z Fold 4 includes a 4,400mAh unit, while the Xiaomi MIX Fold 2 has a 4,500mAh battery on the inside. The difference is minimal, but the MIX Fold 2 does have noticeably larger displays. We cannot really talk about exact numbers, as your usage will differ from the user next to you. That is especially true when it comes to foldable smartphones.

If you end up using the main display all the time, doing your best to ignore the cover display, you’ll drain the battery really fast. If you end up using the two phones as most users would, combining the two, you’ll likely get a really good battery life. Intensive gaming can change that, but for the most part, these two phones offer good battery life. The Xiaomi MIX Fold 2 does seem to be a bit ahead in that regard, but this is a version without Google services, so… it’s not exactly a fair comparison.

How to change time zone on Windows 11

How to Activate God Mode on Windows 11