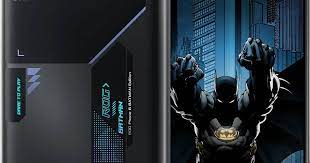 News Tech: According to reports, renders of the Asus ROG Phone 6 Batman Edition have surfaced online. The special edition smartphones are said to have mostly new themes with only very minor design changes on the back. According to a shared image, the purported ROG Phone 6 Batman Edition appears to have a Batman wallpaper. The back wall can be seen in a slightly different color scheme to match the theme. The phone can also be seen with an inscription of Batman under the ROG branding.

The “ROG Phone 6 Batman Edition” branding is also visible on the back right side. The placement of the rear camera module, display chin and bezel, and button placement look identical to the ROG Phone 6. As a reminder, the Asus ROG Phone 6 was launched in India this July along with his ROG Phone 6 Pro. The phone features a 6.78 inch AMOLED display with Full HD+ resolution, 165Hz refresh rate, up to 1200 nits peak brightness and 720Hz touch sampling rate.

Tipster Evan Blass has released a rendering of the Asus ROG Phone 6 Batman Edition in collaboration with 91Mobiles. According to reports, the rumored special edition phone will only feature a new theme to match Batman’s aesthetics, with the front and back design of the handset looking just like his vanilla ROG Phone 6. but there are some changes. On the back is the Asus ROG Phone 6 Batman Edition, which uses shades of blue and purple to accentuate the lines on the back.

It is equipped with Qualcomm Snapdragon 8+ Gen 1 SoC, Adreno 730 GPU, up to 12GB LPDDR5 RAM and up to 256GB UFS 3.1 storage. The Asus ROG Phone 6 features a triple rear camera setup with a 50-megapixel primary sensor, a 12-megapixel ultra-wide lens, and a 5-megapixel macro lens. On the front is a 12-megapixel selfie camera. The handset has a 6,000mAh battery that supports 65W fast charging.

How to Enable or disable Battery Saver on Windows 11

Hide Chat and Meet from Gmail

News Tech: According to Dr. Nigel Clarke, Minister of Finance and Public Service,...