The feds are finally destroying highways with highway funding 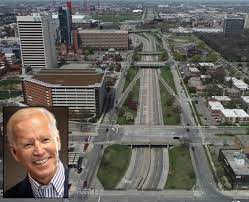 In Science and Space: A Detroit expressway that has divided communities for decades will be demolished with the help of federal highway subsidies, which are routinely lavished with billions of dollars to build or enlarge roadways.

Transportation Secretary Pete Buttigieg told the Associated Press that this section of I-375 “cuts like a gash across the neighbourhood, one of many examples I have seen in communities around the country where a piece of infrastructure has become a barrier.” With these monies, we are now working in collaboration with the government and the local community to make it a route that will unite rather than divide.

Unconventionally, the U.S. Department of Transportation recently used the discretionary grant programme Infrastructure For Rebuilding America, which is generally used to speed up freight transportation, to award Michigan $105 million to begin the dismantling of Interstate 375. When it was first constructed, the mile-long underground motorway destroyed two Black neighbourhoods. Since then, residents have suffered from decades’ worth of lost generational wealth and detrimental health results.

With the award, the state will be able to start demolishing the despised road two years sooner than anticipated, in 2025, and have a street-level boulevard in its stead by 2028. Although the project is expected to cost $300 million, Michigan Governor Gretchen Whitmer initially requested $180 million, but the federal grant is more than enough to begin construction.

They include the Neighborhood Access and Equity Grant programme, which awards communities nearly $4 billion to rebuild transportation connections and community wealth destroyed by highways, and the Reconnecting Communities Initiative, which was reduced from $20 billion to $1 billion during discussions over the BIL last summer.

Still, some claim that a wider cultural shift is taking place. Federal Transportation Administration authorities started urging states to prioritise climate-friendly projects and make repairs before building new asphalt arteries after Congress passed the $1.2-trillion infrastructure package in November 2021. The recent grant-making decisions made by USDOT, according to supporters, demonstrate their seriousness.

According to Steve Davis, assistant vice president of strategy at Smart Growth America, this project is not necessarily intended to knock down highways; rather, it aims to reconnect commutes that have been cut off by infrastructure. Although this was an infrastructure grant, it is obvious that the administration is seriously considering this notion. Community leaders want a say in the strategy before the state moves forward now that Detroit’s cash has been approved. Advocates for better transportation want to make sure that the boulevard that finally takes the place of the highway has stoplights, pedestrian crossings, and protected bike lanes. There is debate over how wide the new road should be; one design shows six and four lanes, while another shows up to ten.

Detroit is surrounded by a “moat of freeways” with “huge interstates” that, in Owens’ words, “actually cut off expansion, or at least vibrant dense development in downtown.” What to do with extra property left over after the removal of the roadway is the most contentious aspect of the idea. In order to provide affordable housing for locals in a 30-block area who were uprooted during the construction of the freeway in the 1960s, Renard Monczunski, a transit justice organiser with the Detroit People’s Platform, wants those tracts to be set aside.

See also  German Finance Minister: The gas tax has been finalized and will not be revised

“It makes very little sense to put money into basically generating the same problem if you’re going to spend the money to repair these things,” Davis said. “With this financing, that risk is very substantial. Although the state will ultimately be in charge, the administration needs to employ as many programmes as it can to guide the ship in that direction.

While the grant is a positive first step toward a future with more equitable land use and climate resilience, supporters point out that it is only a drop in the ocean compared to the money spigot the federal government has opened for new roadways. A few miles from the I-375 construction site, Whitmer is in charge of a $3 billion project to enlarge and replace the two interstates that encircle the Motor City, 95 and 74. However, the plan is moving forward despite Detroit losing 1.2 million residents since 1950. Activists had battled to postpone the plan. What are the following procedures for redressing racial injustices after deconstructing the highways? stated Monczunski. The worry is that affluent white billionaires will get another chance to gentrify those plots of land and build luxurious residences that are out of character with the neighbourhood.

Use Emoji on Windows keyboard

How to Repair PDF With PDF Fixer in Windows 11

Force stop an app on iOS

News Tech: Democrats and Republicans might cooperate on crypto if it works. Faryar Shirzad,...

Hello everyone, in this article we will show you how Improve your gaming experience....