Dark matter interacting with itself may finally become visible 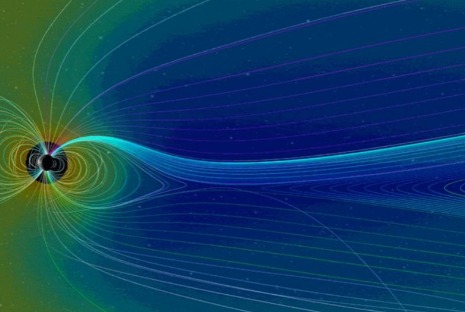 In Science and Space: Despite much circumstantial evidence for the existence of dark matter, the mysterious substance that dominates galaxies and clusters of galaxies, astronomers have yet to see it directly.

Some of these cues were recently reviewed in articles submitted for publication in the journal Reviews of Modern Physics and published in the arXiv preprint database. If the observations are well matched, a strong lensing effect will occur. For example, when an astronomer looks at a distant galaxy cluster, he may see light from even more distant galaxies passing through the cluster. The mass of galaxy clusters (typically 10^14 or 10^15 times the mass of the Sun) is so large that it distorts the structure of the surrounding space. This distorts the image of the background galaxy, turning it from familiar pinwheels and oval structures to long, wobbly snakes and other fun shapes.

But the search isn’t over yet. One of his hypotheses about the nature of dark matter is that some of it may be self-interacting. This means that individual particles interact slightly with each other. If this were true, there would be many subtle observational clues to the existence of this subclass of dark matter.

In the 1970s, astronomer Vera Rubin’s observations of the motion of stars in galaxies provided the first major evidence for the existence of dark matter. In short, the galaxy is spinning too fast. Summing up the galaxy’s total mass based on what we can see, there is not enough gravity to hold a star with such a fast orbit. There should be more dark matter.

Self-interacting dark matter clumps differently than non-interacting matter, which can change the galaxy’s rotation curve—a graph of the velocities of stars in different orbits. Throughout its billions of years of life, matter from its surroundings is constantly raining down on each galaxy. In other words, all galaxies swim in oceans of matter. This matter can include both normal matter and dark matter. When dark matter interacts with itself, the dark matter part of the galaxy lags slightly behind ordinary matter (because ordinary matter can easily swim through all the matter around it). This can result in galaxies with two slightly offset nuclei. One is made of normal matter and the other is made of dark matter. This misalignment can cause tidal disturbances throughout the galaxy and even distort the galactic disk. Future detailed observations of the galaxy may reveal disk distortions that can only be explained by dark matter self-interactions.

When giant clusters of galaxies merge, astronomers can see the debris and understand what’s inside. For example, the famous Bullet Cluster shows what happened when two star clusters merged. Stars and dark matter (measured by gravitational lensing) passed untouched by each other, with all free gas in the cluster colliding at the center of the collision. The fact that dark matter is at the edge of the system indicates that it doesn’t often interact with itself. Otherwise, you’ll get tangled in the middle next to the gas. Bullet clusters and other similar star clusters allow astronomers to set limits on the intensity with which dark matter interacts with itself. Further observations will lead to more precise boundaries, which, as they become more observable, may even yield positive evidence for self-interacting dark matter.

How to Delete Pagefile.sys in Windows