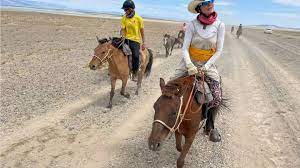 In Science and Space: The summer of 2016 called for a diversion for Betsy Cooksey.

She admitted, “I was afraid I wouldn’t have enough. Just enough of everything, including money and assistance.

After over 30 years of marriage, the 65-year-old grandmother of four had recently had a traumatic divorce and was unsure of what the future might bring.

A friend’s unexpected invitation led to a series of travels to Mongolia over the past five years, during which the Solomon Islands resident rode his horse hundreds of miles through the wilds of western Asia to raise money for kids. Cooksey, who recently turned 70, has made it her life’s work and describes herself as a philanthropic athlete.

She wasn’t prepared for the amount of Southen’s proposition. The Dukha people are the world’s oldest nomadic reindeer tribe, and her buddy was arranging a vacation to Mongolia that would involve a 250-mile ride to their location. The tribe is also referred to as the Tsaatans, which is Mongolian meaning “those who have reindeer,” and it has been residing in the thick forest of Northern Mongolia for centuries.

The trip would be difficult, Southen warned, but Cooksey didn’t hesitate, purchasing a ticket the following day. On her return to Maryland, Cooksey was surprised by how great she felt, she said. “I didn’t know what the heck I was doing out there, but it started me on my way back to wellness,” Cooksey said.

Nine months after her first trip to Mongolia, Cooksey returned for more. Known as the Gobi Gallop Crew Ride, the three-week journey is one of the longest annual horse treks in the world and changes routes each time. Cooksey’s 2017 journey started outside the capital Ulaanbaatar near central Mongolia and led through the famed Mongolian grasslands, ending near the border with China.

The horseback riding service that hosts the event, Horse Trek Mongolia, partners with the Veloo Foundation, a children’s charity. During her first trip, Cooksey had befriended the organization’s founder, Julie Veloo, who in 2007 set out to help orphans and neglected children in the developing world and in Mongolia, including Ulaanbaatar, where residents are forced to scavenge for food and clothes in trash dumps. The money goes to pay salaries for teachers, librarians and psychologists, as well as community outreach and seminars on child abuse prevention and basic human rights. Additional funds go to summer camps for older children and buy books and supplies for arts and crafts, Veloo said in an email.

During the ride, Cooksey raised $30,000 for Mongolian children by setting up an account on her website seeking donations. Today, the foundation has more than 300 children enrolled in its schools, Veloo said.

Increase contrast and reduce motion on iPhone and iPad

Install Use Anydesk for Windows