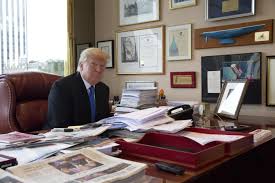 News Politics: He had mountains of paper on his desk. The walls are covered in souvenirs and framed magazine covers. Along with football helmets, boxing belts, and other sports memorabilia, one of Shaquille O’Neal’s enormous sneakers was on display in his Trump Tower office, constricting the amount of table space. Donald Trump, the former president, had a passion for collecting even before he entered politics. And that long-standing habit, along with his blatant disregard for the regulations governing official record-keeping, his careless handling of classified information, and a chaotic transition brought on by his refusal to concede defeat in 2020, have all culminated in a federal investigation that presents extraordinary legal and political difficulties.

He routinely tore up official papers that later had to be taped back together. Official items that would traditionally be turned over to the National Archives became intermingled with his personal belongings in the White House residence. Classified information was tweeted, shared with reporters and adversaries — even found in a White House complex bathroom.

The search of Trump’s Mar-a-Lago club earlier this month to retrieve documents from his White House years was an unprecedented law enforcement action against a former president who is widely expected to run for office once again. Officials have not revealed exactly what was contained in the boxes, but the FBI has said it recovered 11 sets of classified records, including some marked “sensitive compartmented information,” a special category meant to protect secrets that could cause “exceptionally grave” damage to U.S. interests if revealed publicly.

John Bolton, who served as Trump’s third national security adviser, said that, before he arrived, he’d heard “there was a concern in the air about how he handled information. And as my time went on, I could certainly see why.”

But few legal threats have galvanized Trump and his most loyal supporters like the Mar-a-Lago search. The former president and his allies have argued the move amounts to political persecution, noting the judge who approved the warrant has given money to Democrats. The judge, however, has also supported Republicans. And White House officials have repeatedly said they had no prior knowledge of plans to search the estate.

Trump allies have tried to claim the presidency granted him unlimited power to unilaterally declassify documents without formal declaration. But David Laufman, the former chief of the Justice Department’s counterintelligence section, said that’s not how it works.

How to Repair PDF With PDF Fixer in Windows 11

How to Activate Windows 11

As the NHL season begins, both hockey quality and business are on the rise

In this article, we will teach you how Download and play videos from Google...
Science and Space

News Tech: BitDAO is a decentralised autonomous organisation (DAO). That is referred to...

As the NHL season begins, both hockey quality and business are on the rise

In this article, we will teach you how Download and play videos from Google...
Science and Space

News Tech: BitDAO is a decentralised autonomous organisation (DAO). That is referred to...
Blogs

Program an Arduino on Raspberry Pi

Hello everyone, in this article we will show you Program Arduino on Raspberry Pi....
Business