More
HomeNewsPoliticsFormer Malaysian Prime Minister Najib, who is currently in prison, used to...

Former Malaysian Prime Minister Najib, who is currently in prison, used to be a prominent politician 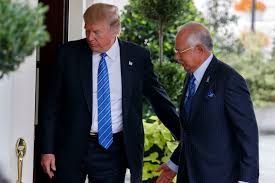 News Politics: Najib Razak, 69, is Malaysia’s first former prime minister to be imprisoned; this is a precipitous fall for the seasoned politician with a degree from the University of London, whose father and uncle served as the nation’s second and third prime ministers, respectively. The massive 1MDB financial crisis, which was directly linked to him, dealt him a personal blow but also briefly loosed his party, the United Malays National Organization, from its political shackles in Malaysia. Since Malaysia gained independence from Britain in 1957, UMNO has led the National Front coalition government with the support of the nation’s ethnic Malay majority.

The Justice Department’s civil case filings also alleged $700 million was transferred from bank accounts used in the money laundering to the bank account of “Malaysian Official 1.” It didn’t name the official, but corroborating details made it clear it was Najib.

Najib set up the 1MDB state investment fund shortly after taking power in 2009. The U.S. Justice Department and other investigators alleged that at least $4.5 billion was stolen from 1MDB by associates of Najib between 2009 and 2014, and laundered through layers of bank accounts in the U.S. and other countries to finance Hollywood films and extravagant purchases that included hotels, a luxury yacht, art works and jewelry. Then-U.S. Attorney-General Jeff Sessions described the scandal as “kleptocracy at its worst.”

The Court of Appeal upheld his conviction and sentence in December, describing the case as a “national embarrassment.” On Tuesday, the Federal Court affirmed the lower court’s decision, sending Najib straight to prison to begin his sentence.

Malalysia has long been beset by corruption, but generally it had been associated with money politics designed to help keep UMNO in power.

Najib was thrust into politics in 1976 after his father died, becoming Malaysia’s youngest lawmaker at age 22, and the youngest ever deputy minister two years later. He became prime minister in 2009, replacing Abdullah Ahmad Badawi who was blamed for the National Front’s reduced majority in an election the previous year.

How to stop computer from waking up on Windows 11

How to Disable Chrome Automatic Updates on Windows 11

Hello everyone, in this article we will tell you how to do it Edit...
Tech News

News Tech: The 2022–23 schedule for the Marshall University swimming and diving team...
Science and Space

In Science and Space: On the International Space Station (ISS), the crew of...

Hello everyone, in this article we will tell you how to do it Edit...
Tech News

News Tech: The 2022–23 schedule for the Marshall University swimming and diving team...
Science and Space

In Science and Space: On the International Space Station (ISS), the crew of...
Business

News Tech: Sen. Joe Manchin, a Democrat, has given up trying to hasten...
Blogs

Hello everyone, in this article we will show you how Enable/disable incognito mode in...