See also  If the party wins the MCD polls, the Congress says defending the "rights" of Dalits and minorities will take precedence
More
HomeNewsPoliticsBy the end of 2022, Ukraine will want "political certainty" from the...

By the end of 2022, Ukraine will want “political certainty” from the EU. 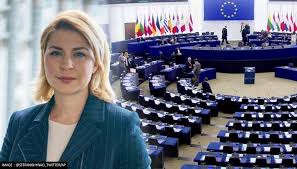 News Politics: Kyiv has now requested “political clarification” from European Union leaders by the end of 2022 on Ukraine entering the bloc as the horrific confrontation between Russia and Ukraine continues, with Kremlin’s troops escalating their invasion and Ukrainian forces putting up stiff resistance. According to Olha Stefanishyna, Ukraine’s deputy prime minister for European and Euro-Atlantic Integration, the war-torn nation has nearly fulfilled 70% of its legal obligations under the Association Agreement with the bloc and is aware that all remaining legal procedures for membership in the European Union must be finished by the end of this year.

“We do not want the process of our joining the EU to be bureaucratic. Of course, as a state, we demonstrate our ability to go through all the necessary legal procedures related to membership as much as possible, but we do not want politicians and EU leaders to drag this process into bureaucracy. Taking into account those challenges Ukraine is facing and the fact that the commitment of the Ukrainian people and Ukraine to the principles of democracy is evident, as well as the fact that we have fulfilled almost 70% of all obligations under the Association Agreement, all of this gives us an opportunity to say that it is not necessary to evaluate us from scratch, but it is necessary to take political decisions. And we want to get such political clarity by the end of the year,” said the Deputy Prime Minister. It is pertinent to note here that the European Union’s Heads of State and Government had approved the request to grant Ukraine EU candidate status on June 23, 2022.

The leader for the European Integration of Ukraine reiterated that the war-battered country does not want to get involved in the bureaucratic procedure to join the bloc. Given the ongoing war situation with Russia and the fact that Ukraine has already fulfilled 70% of the documentation process, evaluation from scratch is not necessary at this time, she said. However, the political decisions can not be ignored, and Ukraine now wants “clarity” on the matter by the end of this year, reported Ukrinform.

How to Recover Backup from iPhone