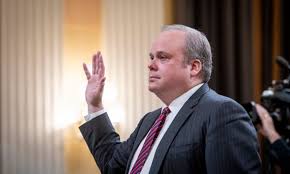 News Politics: After the company’s favoured candidate Donald Trump lost the 2020 presidential election, a former Fox News politics editor who was sacked from the right-wing television network shortly thereafter said that his former employer had failed its audience with its election coverage. Chris Stirewalt claims in his new memoir that Fox News fueled the “black-helicopter-level fear and hatred” that powers white nationalist organisations while generating high ratings. Stirewalt’s Broken News: Why the Media Rage Machines Divides America and How to Fight Back also confirms what many already know: Fox fired him because he consistently defended — even on-air — the decision of his team to declare Joe Biden the winner of Arizona’s 2020 electoral college votes on the same evening that voting ended.

A statement on Monday by a Fox spokesperson said Stirewalt’s departure from the network in early 2021 was simply part of a broader company restructuring, and it noted that the employee who was actually in charge of the desk that made the Arizona call during that fateful hour remains at the company.

The call enraged Trump, prompting the incumbent president and his allies to mount a pressure campaign aimed at getting Fox to retract the decision while that camp pushed forth lies that electoral fraudsters in other battleground states were stealing the election for Biden.The New York Times obtained and reported on an advance copy of the book.

The statement also dismissed its former editor’s other recollections about his time at Fox News by saying, “Chris Stirewalt’s endless attempts at regaining relevance know no bounds.”

Stirewalt also expresses disbelief that Carlson’s viewers portray him as bravely discussing topics that are taboo to the mainstream when – according to the ousted editor – he is simply regurgitating the things his audience already believes.

“Carlson is rich and famous, yet he regularly rails about the ‘big, legacy media outlets’,” the memoir argues. “Somehow, nobody even giggles.“It does not take any kind of journalistic courage to pump out night after night exactly what your audience wants to hear.”

How to Check RAM Specifications on Windows 11