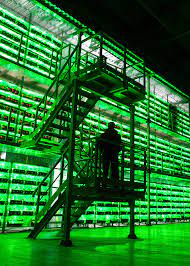 News Tech: An employee of the republican hospital in Gorno-Altaisk, the Altai Republic’s capital city in southern Siberia, was detained for establishing a cryptocurrency farm at a hospital. The Russian cryptocurrency news websites Bits.media and RBC Crypto stated that he has been operating the mining equipment since early last year.

The mining equipment functioned for nearly a full year on stolen energy, the regional office of the Federal Security Service (FSB) said, resulting in losses of more than 400,000 rubles (about $7,000 at the time of writing).

According to a press release from the nation’s Ministry of Internal Affairs, the man, who served as the chief information security specialist, installed the coin minting equipment in February 2021 and connected it to the hospital’s servers, which had previously been used to treat patients with Covid-19.

The law enforcement agency added that the IT specialist became involved in bitcoin mining due to financial troubles. He made the decision to set up the mining operation at his place of employment after realising that he lacked the requisite computational power and energy at home.

Authorities in Dagestan dismantled two illicit crypto farms in May of this year, seizing more than 1,500 mining equipment in the process. One of them was at a water supply business pumping station in the Russian republic.

A native of the city’s capital, Mahachkala, had partnered with water utility workers to build the mining plant there. In the meanwhile, the Butyrka jail in Russia, which is the country’s oldest prison, has a crypto mining setup. According to reports, a deputy warden ran it.

How to Allow or Block Access Microsoft Store on Windows 11

How to Get Back Windows 7 Games on Windows 11

Use Narrator on Windows 11

40% of employees of Indian crypto exchange WazirX are laid off

Hello everyone, in this article we will show you how install Windows 11 using...
Business

UK finance minister vows to ‘stay the course’ despite criticism

In this article, we will teach you how to do it Remove stickers from...

40% of employees of Indian crypto exchange WazirX are laid off

Hello everyone, in this article we will show you how install Windows 11 using...
Business

UK finance minister vows to ‘stay the course’ despite criticism

In this article, we will teach you how to do it Remove stickers from...
Science and Space

NASA has postponed the launch of Artemis 1 to November

In Science and Space: NASA will wait until at least mid-November before attempting...
Business

A fundraising motorcycle ride for Matthew Tidman, a correctional officer who was assaulted on the job

News Tech: On Sunday in Westboro, dozens of people participated in a motorcycle...