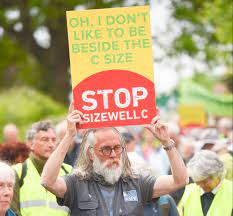 News Tech: During his final weeks in government, Boris Johnson is said to have approved money for the new Sizewell C nuclear power facility.

The project, which is likely to cost up to £30 billion, will seek private backing, with the government putting forth a suggested 20% stake of up to £6 billion when a final decision on public involvement is made early next year.

The prime minister and chancellor, Nadhim Zahawi, “made a decision in principle to part-fund the proposed building of the Sizewell C nuclear reactor in Suffolk many weeks ago without informing other ministers,” according to Whitehall officials quoted in The Sunday Times.

A plan presented by Mr. Johnson in April warned that up to eight additional reactors will be required in the next ten years to secure clean and inexpensive energy. The project is regarded to be essential to the UK’s energy independence amid rising grid demand and the prospect of Russia reducing gas supplies. The two reactors at Sizewell C will have a combined generation capacity of 3.2 GW, or roughly one-tenth of the average energy demand in the UK.

The Sizewell C power plant was granted planning permission in July but until now there appeared to be no decision on funding.

While essentially a caretaker Prime Minister after being forced to resign over a succession of scandals, Mr Johnson previously said he would not be making major decisions before leaving office. However, The Sunday Times reported a senior official had confirmed “the decision had been taken in principle” and the “PM is very keen on it”.

The decision was said to have been made with Business and Energy Secretary Kwasi Kwarteng with sources telling the Sunday Times “no one is more enthusiastic than Kwasi”. It comes as the Government seeks to shore up energy supplies and create energy security as prices soar in the wake of Russia’s invasion of Ukraine.

A government spokesperson said: “Nuclear power has a key role to play as we work to reduce our reliance on fossil fuels and exposure to volatile global gas prices. “Negotiations are still ongoing on Sizewell C and as these are active and commercially sensitive discussions we cannot comment further.”

Another of Truss’s senior aides is reported to have said a taxpayer-funded stake in the power plant may limit her economic plans. The Tory leader candidate has pledged vast tax cuts, including a reversal of the national insurance hike costing at least £30bn per year if she is successful next month.

A letter from Simon Clarke, chief secretary to the Treasury, appeared to raise concerns the costs of the project are “sufficient to materially affect spending and fiscal choices for an incoming government, especially in the context of wider pressures on the public finances”. Although Mr Kwarteng, tipped to be Ms Truss’s chancellor if she wins the Tory leadership race, is reported to be on board with the plans, a leaked letter to The Sunday Times revealed not all in her camp agree.

How to Reset or Clean Microsoft Store cache on Windows 11

How to open HEIC or HEVC files on Windows 11

News Tech: The finance minister of South Korea downplayed the necessity of a...