See also  Extensive help to women who are financially abused
More
HomeNewsBusinessFind out who was paid the big bucks to fill your mailbox... 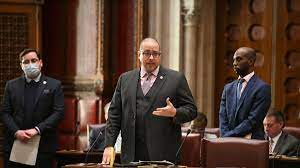 News Tech: Look no farther than independent expenditure committees, particularly those funded by Wall Street investors, real estate firms, and other well-resourced interests, if you’re wondering why your inbox has been overflowing with political flyers.

According to state records, groups with obscure names like the Coalition to Restore New York and New Yorkers for a Better Community have contributed more than $1.7 million, nearly all in New York City, to the state Senate primary elections in New York during the past month.

As long as they don’t coordinate with campaigns, organisations are allowed to spend as much money as they want to elect a candidate under the Supreme Court’s Citizens United ruling.

Most of such expenditures target incumbent progressive Democrats or support centrist candidates in Democratic primary elections. Misleading information has also been present in several mailings and online adverts this year.

Rivera has taken stances in support of expanding tenants’ legal rights and against charter school expansion — causes that run counter to many of those funders’ interests.

New Yorkers For a Balanced Albany, a group whose treasurer works for the pro-charter school organization StudentsFirst New York, has given more than $234,000 to support Rivera’s opponent. The committee is funded largely by a cohort of pro-charter school business leaders, including Jim Walton, an heir to Sam Walton’s Walmart fortune, and Paul Singer, a hedge fund founder notorious across South America for his firm’s cut-throat debt collection tactics in court. This is not the Walton family’s first foray into Bronx politics: Last year, Alice Walton steered $75,000 to an independent group that unsuccessfully attempted to sway a special election for City Council.

“New Yorkers for a Balanced Albany has a proud history of supporting candidates who advocate for education reform and parent choice,” said Crystal McQueen-Taylor, Executive Director of StudentsFirstNY, which is affiliated with New Yorkers for a Balanced Albany, in a written statement. “This year’s elections are critical for Bronx parents, and we’re proud to stand with Miguelina. We can’t wait to see what she’ll bring to Albany.” ‘Common Sense’ New Yorkers
Real estate developers are also going after Rivera too.

The group Common Sense New Yorkers Inc. has funded $53,000 in attack mailers and opposition canvassers against the progressive. State records show it raised most of its money this year from a handful of real estate companies. Common Sense has leaned heavily on irony and distortions in some of its ads in an attempt to paint candidates as dangerously left wing.

Voters of NY paid for traditional political mailers supporting Crowley and attacking Gonzalez. Meanwhile, Common Sense sent out $18,000 in mail taking an unusual stand for a real estate-backed group: it urged votes for Nomiki Konst, a socialist candidate who has since dropped out, calling her the “only socialist” in the race — despite Gonzalez’s DSA backing.

That contest, pitting Crowley, a former Council member, against Democratic Socialists of America-endorsed Kristen Gonzalez, is of particular interest to the real estate industry given Gonzalez’ opposition to a tax break developers hope to restore, known as 421-a, and her support for strengthening eviction protections. In Queens, Common Sense and another committee, Voters of NY, that also shares the same treasurer, Jeffrey Leb, spent more than $81,000 over the past week in an apparent effort to assist Elizabeth Crowley, a centrist Democrat, running for an open state Senate that runs from Astoria to Williamsburg.

How to Edit PDF on Windows PC

News Tech: In a series of tweets on Saturday, billionaire Bill Ackman discussed...

News Tech: The Lenovo Flex 5 is one of the best 2-in-1 laptops...
Politics

News Politics: In an effort to appeal to Purvanchali voters, the Congress unit...