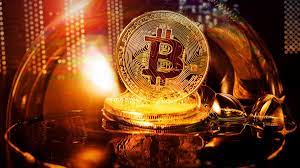 News Tech: On August 22, cryptocurrency values remained basically unchanged as the market struggled with inflation and Russia’s pessimistic forecast on the invasion of Ukraine.

On August 15, Bitcoin crossed the significant $25,000 mark, but price has subsequently fallen by almost 13%.

named “Symbolic Threshold”
According to CoinGecko, at the time of the most recent check, the most widely used cryptocurrency, bitcoin, was down slightly at $21,237, while ether, the native currency of the Ethereum platform, was practically flat at $1,570, and dogecoin was barely altered at $0.066857.

According to Martin Hiesboeck, head of blockchain and crypto research at Uphold, “Summer rallies on extremely low volume in both traditional equities and digital assets are nothing new.”

“In the US, the Fed has come under renewed attack from important voices that they hadn’t done enough — and were still not doing enough — to stop inflation,” Hiesboeck said. “Put those two together and we will see continued dollar strength – Euro is at parity again this morning — and in turn, Bitcoin weakness”.

Winston Ma, managing partner of CloudTree Ventures, said that ethereum, the second-biggest cryptocurrency, has been “massively outperforming” bitcoin. The main reason for that, he said, is the market’s high expectation for “the Merge”, where the platform will undergo a major update as it shifts from proof-of-work to proof-of-stake.

Waiting for ‘The Merge’
The Merge is expected to reduce ethereum’s energy consumption, lower transaction fees (also known as gas fees), and make operations easier and more fluid. “The shift from POW to POS is expected to make Ethereum more energy-friendly and more sustainable,” said Ma, author of “Blockchain and Web3: Building the Cryptocurrency, Privacy, and Security Foundations of the Metaverse.” “But the key question here is whether this merge will happen as scheduled? It is slated to take place on Sept. 15 after numerous delays. Is this time for real?”

See also  According to Piyush Goyal, Prime Minister Gati Shakti is ordering geospatial mapping for everything

On the regulatory front, David Lesperance, managing partner of immigration and tax adviser at Lesperance & Associates, said “stablecoin Tether’s founders are hearing the approaching footsteps of regulators and therefore have decided to up the quality of their auditors.” In July, Tether started working with BDO Italia, an independent subsidiary of BDO LLP, the fifth largest accounting network globally, to issue quarterly attestations on the stablecoin operator’s reserves.

Celsius Network filed for Chapter 11 bankruptcy on July 13, becoming a casualty of the cryptocurrency market crash that saw more than $2 trillion wiped out in less than nine months. “Previously this was a step taken in high-profile restructurings of Enron and Lehman Brothers, both of which found executives bearing responsibility for the companies’ demise,” Lesperance said. “The U.S. Trustee office said there are ‘numerous questions’ about Celsius’ operations and its financial health, as well as how its management allowed it to enter bankruptcy.”

Separately, he said, “the U.S. Trustee office, the U.S. government’s bankruptcy watchdog, is taking the temperature of the collapse of crypto lender Celsius.” ‘Anxious for Clarity’
“Cayman Islands-based accounting firm MHA Cayman was Tether’s auditor and was much criticized as not being a Tier 1 audit firm,” Lesperance said. “The entire crypto community including regulators are anxious for clarity on Tether’s ‘Commercial Paper’ holdings, in the audit which is expected imminently.”

Prevent phone from overheating in Summer