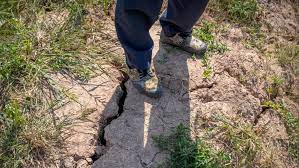 News Tech: More than 1,500 people in southwest China have been evacuated due to brush fires, and power restriction for enterprises has allegedly been extended as weeks of record heat and drought hammer the area.

Crops have withered due to the heat and drought, and rivers, such as the enormous Yangtze, have shrunk as a result. This has disrupted freight traffic and cut hydroelectric dam power output at a time when demand for air conditioning is at an all-time high. According to state media, the government would use chemical sprays to try to induce rain in order to try to safeguard the fall grain harvest, which accounts for 75% of China’s yearly total.

According to official broadcaster CCTV, certain malls in the massive city of Chongqing have been instructed to close for the most of the day in order to lower the demand for power. The malls’ restricted hours are from 4 to 9 p.m.

The interruption heightens the difficulties facing the ruling Communist Party, which is attempting to revive the economy ahead of a conference this autumn where President Xi Jinping is anticipated to be handed a third five-year term as party chief.

Last week, factories in Sichuan that produce processor chips, solar panels, auto components, and other industrial goods were forced to cease operations or scale back production in order to conserve energy for homes as the demand for air conditioning increased in response to temperatures as high as 45 degrees Celsius (113 degrees Fahrenheit). In workplaces and retail centres, the lights, elevators, and air conditioning were turned off.

The Shanghai municipal administration said that Tesla Ltd. and a significant state-owned carmaker paused production last week owing to a disruption in component supply from Sichuan. Shanghai is an industrial and shipping hub on China’s east coast. Sichuan, which has 94 million inhabitants and relies on hydroelectric dams for 80% of its energy, is particularly heavily struck. More coal-fired electricity is used in other provinces, which is unaffected.

According to economists, given Sichuan contributes just 4% of China’s industrial production, the national impact should be minimal if the province reopens reasonably quickly. According to the Chinese government, this summer has been the warmest and driest in China since records for temperature and precipitation collection began in 1961. For the previous week and longer, temperatures have been above 40 degrees Celsius (104 degrees Fahrenheit).

The most recent calamity brought on by the heat and dryness is brush fires in Chongqing’s outlying districts, which borders Sichuan. In addition to mobilising over 5,000 civilian and military troops to put out the fires, more than 1,500 residents have been relocated to shelters, according to the official Xinhua News Agency.

According to Xinhua, no deaths have been associated with the heat wave to yet, however this could not be independently verified.

In the highlands of Sichuan province, a wildfire claimed the lives of 30 firemen and volunteers in 2019. In order to assist ground personnel who had previously been left to their own devices, helicopters have been ordered to dump water on the fires.

Use DISM to repair local image on Windows 11

How to Check RAM Specifications on Windows 11

Turn on Flash Player on Android 12

News Tech: While being questioned by parliamentarians on Thursday over a crisis that...