America used to have corporate regulations. Now the government subsidizes it 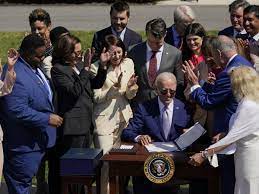 News Tech: Government regulation of air pollution was made possible by the Clean Air Act of 1970.

Do you see the distinction?

More than $300 billion will go into energy and climate change initiatives under the Inflation Reduction Act, which Joe Biden signed into law last week. This includes $30 billion in subsidies for solar panel and wind turbine producers.

The Inflation Reduction Act is a crucial step in the direction of slowing down or ending the current climate disaster. It also shows how the country has moved from regulating corporations to subsidising them.

the Chips and Science Act (with $52bn of subsidies to semiconductor firms, plus another $24bn in manufacturing tax credits);
the Infrastructure Investment and Jobs Act ($550bn of new spending on railroads, broadband and the electric grid, among other things);
and now the Inflation Reduction Act (including the subsidies I noted).
This shift from regulation to subsidy has characterized every recent administration.

Advertisement And Obama spent about $489bn bailing out the financial industry (and, notably, never fully restored financial regulations that previous administrations had repealed), as well as GM and Chrysler.

Before the 1980s, the US would have done all this differently. Instead of subsidizing broadband, semiconductors, energy companies, vaccine manufacturers, health care and pharmaceutical businesses, and the financial sector, we would have regulated them – requiring them to act in various ways. If this regulatory alternative seems far-fetched today, that’s because of how far we’ve come from the regulatory state of the 1930s to the 1970s, to the subsidy state beginning in the 1980s.

I saw this first-hand. Bill Clinton’s healthcare plan was blocked by the pharmaceutical and healthcare industries, which would have had to sacrifice some profits. By contrast, Obama got the Affordable Care Act by paying off these industries – all but guaranteeing them larger profits from a massive inflow of newly subsidized customers.

Today it’s politically difficult, if not impossible, for government to demand that corporations (and their shareholders) bear the costs of public goods. Government must bribe them instead. Why the big shift? Because of the change in the balance of power between large corporations and the government.