See also  Digital services have become a significant contributor, according to new analysis of the NZ-US trade partnership
More
HomeNewsBusinessAble Eyes, based in Mason, provides a virtual tour of several locations

Able Eyes, based in Mason, provides a virtual tour of several locations 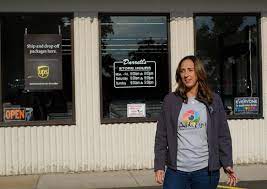 News Tech: Able Eyes, a local woman’s web business that provides virtual tours of eateries, entertainment venues, and other public spaces, has been operating for five years and currently offers an inside look at about 1,000 locations around the nation.

Able Eyes now provides 360-degree virtual tours of places in all 50 states as well as the UK. Nearly 100 places in the Lansing region are included in the virtual tours, including libraries, hotels, restaurants, coffee shops, and museums in addition to structures on the campus of Michigan State University.

Meegan Winters, a former special education teacher and administrator, and Brian Town co-founded the website in 2017 by contacting Lansing-area companies, organisations, and tourist attractions to give people with disabilities the ability to explore places before they visit.

Users have access to a tool within each tour that measures doorways and areas, allowing wheelchair users and other people with mobility challenges to assess whether they will be able to explore the place. Users can travel through them virtually at their own speed.

“When we tour a place before going both of us don’t have as much anxiety and it really almost eliminates it completely,” she said.

Touring spaces virtually
Winters was still a teacher at a school in Jackson County the first time she saw a 360-degree video while at a conference in Chicago. “This could change the lives of people with autism,” she thought.

“Because one of the common characteristics of a person on the spectrum is difficulty with transitions, difficulty doing things that are maybe out of routine, going places for the first time that are new,” Winters said. A visit to a new place can cause Dominic Blatnik to feel extreme anxiety that can trigger his epilepsy, his mother said.

“Being able to see where he’s going beforehand cuts down on almost 100% of the anxiety,” she said. “The unexpected could also cause him a seizure.” Able Eyes started with about 20 virtual tours of area locations. Within its first year, the Greater Lansing Convention & Visitors’ Bureau began working with the company, as part of a strategy to make more visitors feel welcome while exploring the area, said Julie Pingston, the visitors’ bureau’s president and CEO.

For Joe Rezmer, 42, who has spinal muscular atrophy and has moved through life with a wheelchair since age 7, Able Eyes has helped him prepare for trips from his home in Pinconning to the Lansing area, where he visits friends. He’s been viewing virtual tours on the site for three years. “It’s nice to know if I’m going to go to a restaurant if I’ll be able to get around or if I can get into the bathroom, which is important,” Rezmer said. “It lets me see what’s there before I go there.”

Lansing is the first city to earn the certification of “Accessible City” on the Able Eyes site. The label is given to communities that have a minimum of five dining, five lodging, and five attractions with virtual tours. More cities have since received the label, Winters said. “That went hand in hand with the timing of really helping Lansing, and the Lansing region be able to promote itself as a welcoming destination for those on the autism spectrum,” Pingston said.

How to Get Snapchat Premium on Android Device